Time for some fast facts and trivia!

Question 1. What is the smallest dabbling duck in North America?

The Green-winged Teal is the smallest dabbling duck in North America. The dabbling ducks are the freshwater ducks that feed in shallow water, so they do not dive deep for food. They are all in the Anatinae family. The average weight is 0.7 lbs for males and 0.6 lbs for females with lengths 12.2 to 15.3 in.

Source: All About Birds

Question 2. Sandhill cranes winter in all the following U.S. states except:

Each winter they undertake long journeys to wintering grounds in Florida, Texas, Utah, Mexico, and California. En route, more than three-fourths of all sandhill cranes use migratory staging areas in a single 75-mile stretch along Nebraska’s Platte River.

Question 3. Which bird has been recorded at the highest altitude? 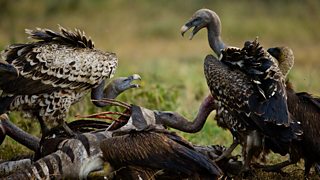 On 29 November 1973, a Ruppell’s Griffon collided with a commercial aircraft at 37,000 ft over Abijan, Ivory Coast, western Africa. They use their keen eyesight to scan the ground below from extreme heights and then once a meal is spotted, they swoop down to grab the prey. Other birds such as the bar-headed goose and common crane fly at high altitudes over 30,000 feet to avoid predatory birds.

Are these a real animal species or from a fictional universe?

Aardwolf – real, a close relative of the hyena in Africa