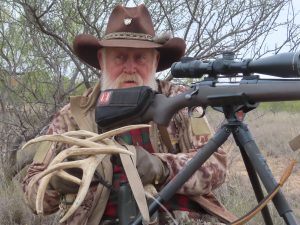 I was getting tickled.  Each time I made a statement my hunting partner asked “Why?”  I was tempted to simply respond “Because!”  The questioning started moments after I passed up the best buck we had seen in four days of hunting hard all day long.  When not rattling, or sitting and watching, we walked.  Walked up and down slopes, slipped quietly and slowly through canyon bottoms rattling antlers when I thought “things” felt “right.”

The “Why?” again started shortly after we pulled into the North Gate which gave access to the northeastern part of the lease I am on west of San Angelo, Texas.  No sooner had we pulled into the gate, driven less than 200 yards when a doe came running toward the Jeep.  She stopped less than 50 yards away.  Her tail was at half-mast.  This is usually an indication she was in estrus or fast approaching her time of the year.  A few seconds later we spotted what was adamantly chasing her…  A buck, but not just a buck, an apparent 8-point with tall tines, including long brow-tines which angled outward.  He appeared mature, based upon swelled neck and darkly stained hocks.  In our area of Texas most bucks have cream puff-colored tarsals until they turn four. After that, the tarsals of older bucks are darkly stained sometimes all the way down to their ankles.  Hunting for a mature buck, my prerequisite, first thing I look at during the rut when evaluating a buck is their tarsal glands or hocks.

The big 8, actually had nine points.  Like his hocks, his antlers were stained a dark brown with tips of polished ivory.

The buck hesitated, staring at us from less than 75 yards away.  Shoot or not?  That was the immediate question.  I had dropped my binos and was looking at him through my Trijicon AccuPoint variable, crosshairs, and tiny green Tridium dot solidly planted on his chest.  I pushed my safety of my .270 Win, loaded with Hornady 150-grain ELD-X Precision Hunter to “Fire”.  But, my finger rested alongside the trigger guard, knowing if I moved it to the trigger, set at 2-pounds worth of pull my shot would be on mark and true.  But…I hesitated!  Why?

Behind the 8-point were two other bucks, although not his equal in antlers or body.  What to do?  Possibly a larger antlered buck lingered just out of sight…

Our lease is under a Texas Parks and Wildlife Department Managed Land Deer Permit, thus bag limits are determined by our approved and ongoing wildlife management program.  As such my quota, without having to use a tag from my hunting license was three remaining bucks.  Earlier, the day before had taken an eight years old or older, 8-point buck when he responded to my rattling horns (I know deer do not have horns they have antlers, but when referring to rattling, I tend to call them rattling horns).  He had charged in. Then stopped to smell of recently deposited urine.  When he “flehmed” or lip curled, meaning drawing urine over specialized scenting cells to determine her estrus status, I shot him with the same rig I now used to evaluate the fate of the big eight point.

I had the ancient 8-point along with a doe in the cooler.  Those two would provide excellent venison.  But then, I had several freezers to fill including those of family members and elderly friends who annually depend upon me to provide them with a year’s supply of venison.

I looked over at my hunting partner, Brandon Houston.  Brandon and I work together on numerous projects including our wildlife consulting company, H3 Whitetail Solutions (www.h3whitetailsolutions.com) which “deals” with not only whitetail deer but many other game and non-game species found across North America and occasionally beyond.  Brandon too, was working on a new hunting and wildlife conservation tv/digital show project, “The Journey”.  I was and am helping him where I can, including working both in front and behind the camera.  The new show will start appearing on CarbonTV (www.carbontv.com) starting in January 2023.  He in turn helps with my weekly podcast “DSC’s Campfires with Larry Weishuhn” available at www.waypointtv.com and also www.carbontv.com, social media and other projects.

“Are you going to shoot?” Asked Brandon busily filming.

“Not much of an answer!  He’s the biggest buck we’ve seen. Should easily score in the high 140s B&C,” then added, “I’ve got the camera on him…”  Still I hesitated. 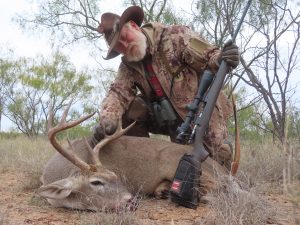 Over the years I have been fortunate and blessed to have hunted whitetails throughout North America.  I have taken some really nice whitetail bucks, my largest scoring well over 200 non-typical taken while hunting North River Outfitting in Alberta, a great commercial hunting operation owned and operated by dear friends Ms. Maria and Ron Nemetchek.  That buck, like a 135-gross scoring non-typical B&C Coues whitetail taken in Sonora, Mexico are what I consider my two largest ever whitetails.  They are also the only bucks I have ever placed in the Boone & Crockett record book. In the past I had taken non-typical whitetails scoring in 200s, and at least three or four typical free-range bucks that would have easily made the B&C all-time record book, scoring in the 170s and 180s, had I entered them.

Memories of taking those deer fleeted back and forth across my mind.  I put my .270 on “safe”, lowered it and raised my Canon video camera.   As I did the buck started to move to again chase the chosen doe. Both Brandon and I filmed him and her until they disappeared into a brush draw.

“Can’t wait to see the footage of the buck chasing.  Now that was most interesting!” I responded avoiding a real answer.

“You nicely side-stepped than one!” said my grinning partner.

“Had I shot him we would not have gotten that fabulous chasing sequence.”  Brandon smiled. “Had we rattled him in, or simply encountered him still hunting, or spotted him a long way off and stalked to within easy range, or if I had had my Taurus .454 Casull loaded with Hornady ammo I probably would have shot him.”

I glanced in Brandon’s direction, he was nodding in a positive manner! I suspect he did understand!

But then he again started to respond with “Why..”

Before he could finish his question, I cut him him off with “You’ve just exceeded the limit of “why’s” at least until tonight when we gather around the campfire.

He nodded in an agreeable and positive manner….