DSC Foundation is pleased to announce Conservation Visions’ Shane Mahoney as the inaugural winner of DSC Foundation’s Education Award. Recognizing the need to educate the public, media, and elected officials on the benefits of science-based wildlife management and legal, regulated hunting, this award acknowledges the contribution of organizations or individuals that significantly and uniquely educate others on wildlife conservation. 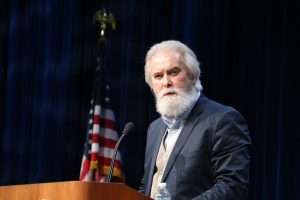 Founder and CEO of Conservation Visions, Shane Mahoney is an internationally recognized conservationist and wildlife advocate and is considered a foremost expert on the North American Model of Wildlife Conservation. The former Head of Wildlife Research and Executive Director of Sustainable Development and Science for the Government of Newfoundland and Labrador, Mahoney is a strong believer in the benefits of communicating conservation science and sustainable wildlife use to the wider public. His views are respected across the entire spectrum of the conservation world – in the scientific and professional wildlife communities, as well as by NGOs, the outdoor industry and the hunting and non-hunting public alike.

A recipient of numerous awards, Mahoney is admired as a tireless worker on behalf of wildlife and a vocal proponent of sustainable use as a conservation tool. Today, he serves as Deputy-Chair of IUCN’s Sustainable Use and Livelihoods Specialist Group, International Liaison for the Wildlife Society, and President of the International Council for Game and Wildlife Conservation’s Policy and Law Division.

Conservation Visions’ motto, “One Natural World, One Humanity, One Chance… Conservation Matters,” reflects Mahoney’s certainty that the conservation movement is more important today, than ever before. It also underscores his belief that the future of wildlife and humanity are inseparable, and that only through an emphasis on our shared dependance on the world’s ecological landscapes can we deliver a sustainable future for all living things. His love of wild animals and wilderness, and his concern for human cultures and rural livelihoods have long been recognized. So too, has his capacity and talent to speak on their behalf.

Mahoney has been an appointed adjunct professor to several universities in Canada and served as advisor to numerous conservation organizations. His scientific research has focused primarily on the predator-prey interactions and population dynamics of large mammals and has been presented in a wide range of peer-reviewed journals, book chapters, technical reports and international symposia. He is also widely recognized as a leading authority on North American conservation history and policy and has been in the forefront of debates on issues of sustainable use within both the United States and Canada. Well recognized as a communicator on these issues he has worked extensively in various media, writing and narrating for radio, contributing to popular magazines as well as technical journals, hosting and narrating television series for various entities including the British Broadcast Corporation, and producing independent films. He has lectured before diverse audiences around the world.

“Communicating on behalf of wild species, and the inseparable nature of human and wildlife inter-dependence has been the focus of my life and career,” says Mahoney. “I deeply appreciate this recognition by DSC Foundation. “